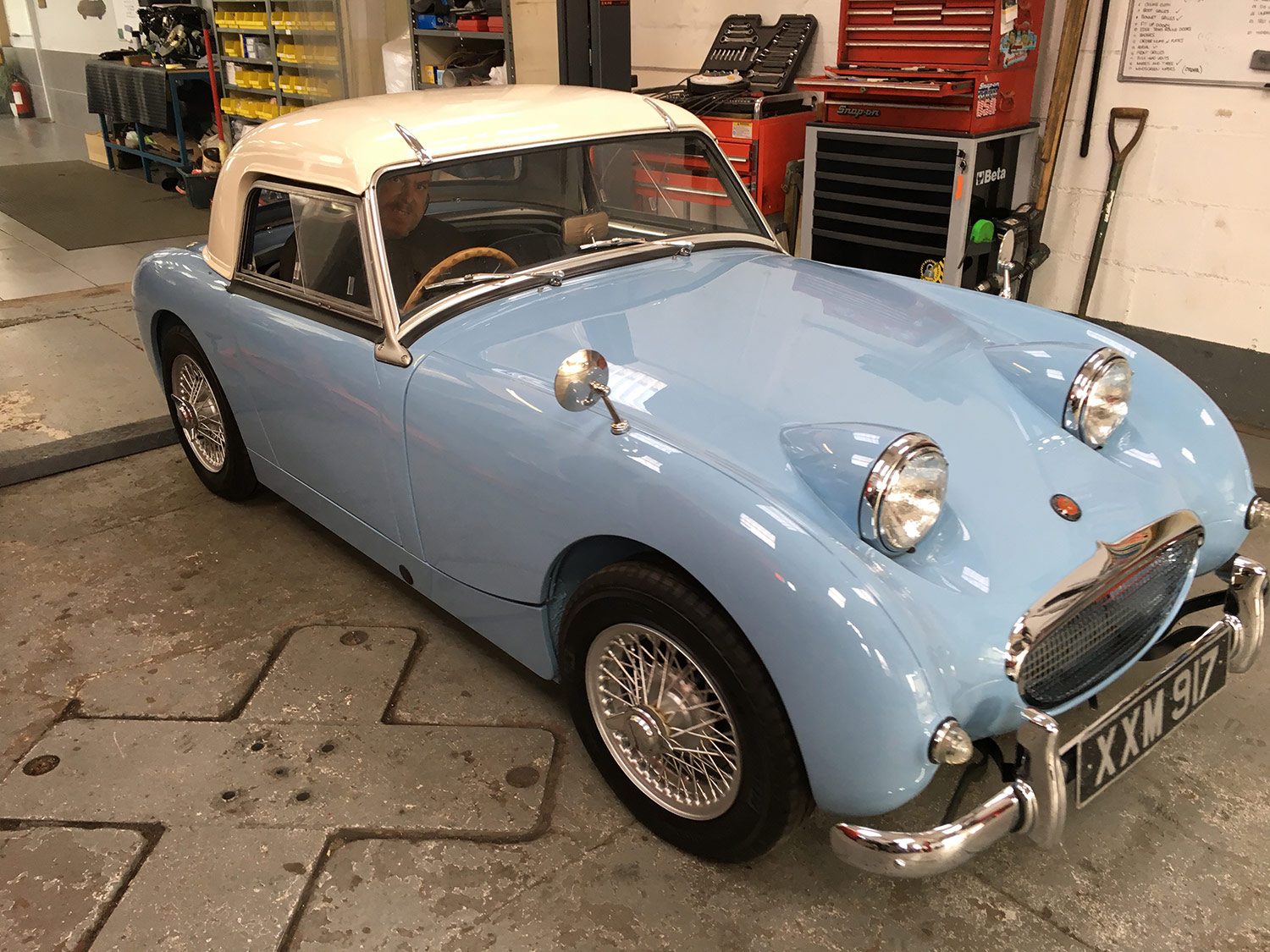 We bid farewell to our 1959 Austin Healey Frogeye

Today, we said goodbye to our beautiful 1949 Austin Healey ‘Frogeye’ Sprite as she makes her way down to Grays in Essex to settle in 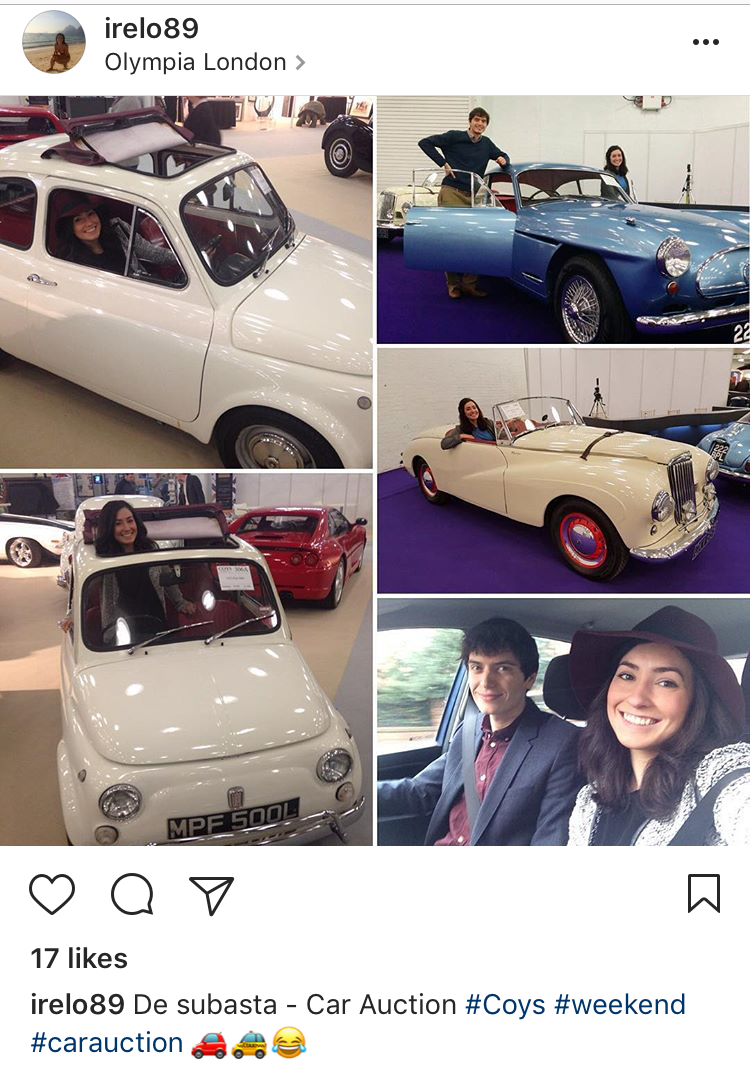 We’ve had an amazing weekend at Olympia Historic Automobile Fair and Auction. With our 1956 Jensen 541 taking pride of place beside the auction area, our 1972 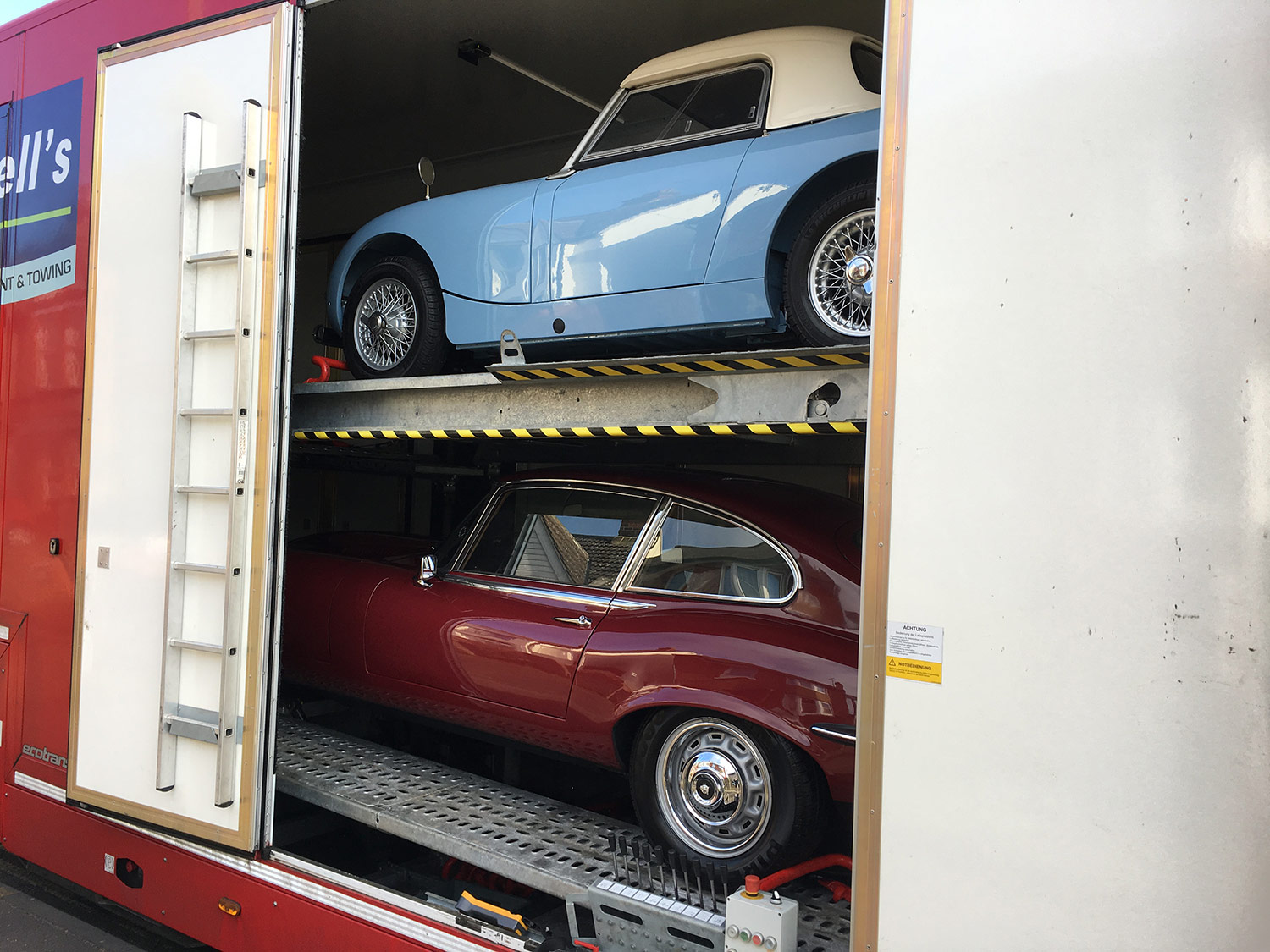 Off to Olympia Historic Automobile Fair and Auction

February 16, 2017
Apologies to anyone on Norwich Road in Ipswich this morning as we unexpectedly slowed down the traffic whilst loading our fantastic classics ready for the
Read More » 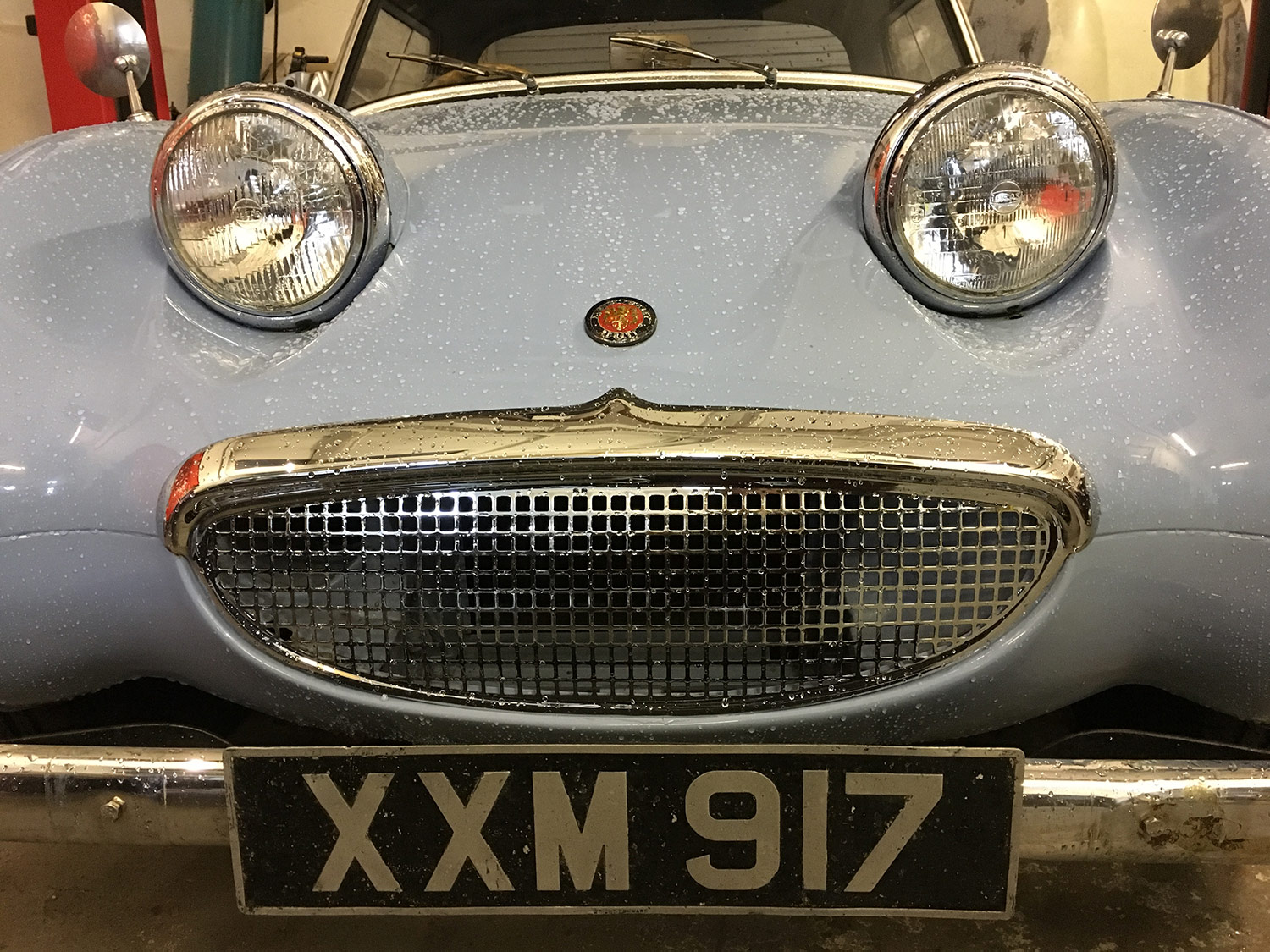 Our 1959 Austin Healey Frogeye Sprite (Sebring) arrived at the Bridge Classic Cars workshops bright and early this morning, having travelled down through the night from 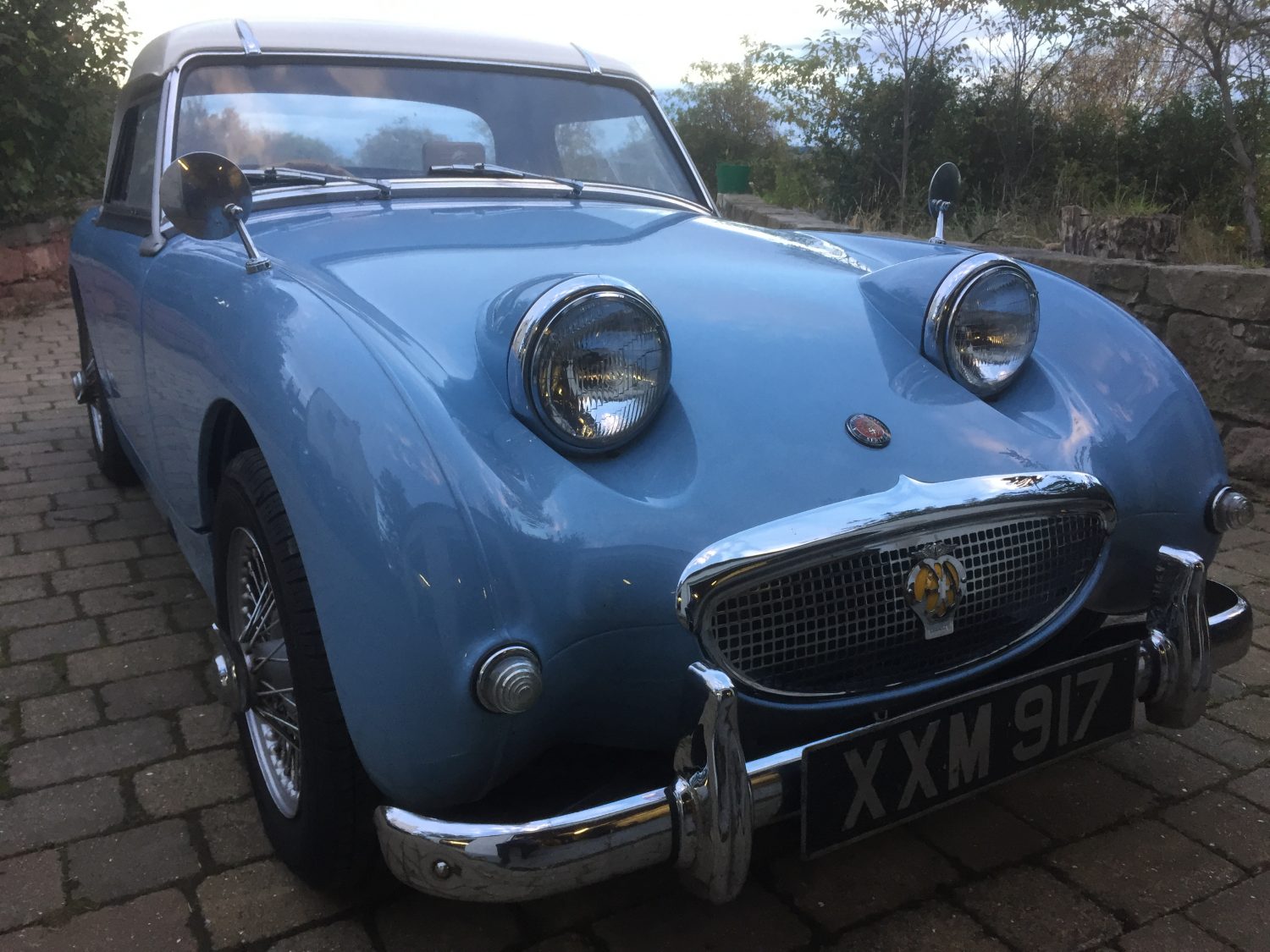 December 9, 2016
Soon to be arriving at Bridge Classic Cars This Beautiful 1959 Austin Healey Sprite, has modifications of the type carried out in period by “The
Read More »

We bid farewell to our 1959 Austin Healey Frogeye

Today, we said goodbye to our beautiful 1949 Austin Healey ‘Frogeye’ Sprite as she makes her way down to Grays in Essex to settle in the Vintage and Prestige showroom.

John had the last drive of her for now but who knows if we’ll see her again. Unfortunately I didn’t manage to get any photos of John getting out of the Austin Healey ‘Frogeye’ Sprite which is a real pity for comedy value alone!

Here we have her being loaded onto the Vintage and Prestige ready for the trip. We’ve had an amazing weekend at Olympia Historic Automobile Fair and Auction.

With our 1956 Jensen 541 taking pride of place beside the auction area, our 1972 Jaguar E-Type V12 attracting the largest crowd, our 1972 Fiat 500L seemed to get the most photographic attention and our 1959 Austin Healey Sprite getting the best feedback from auctioneer Guy, the weekend couldn’t have been better for Bridge Classic Cars.

Not only did we receive fantastic feedback over the weekend but a quick search on Instagram showed that our cars were potentially seen by over 46000 Instagram followers. We can not thank the visitors of Olympia and the Instagram members enough for their amazing photos.

A special thank you to: Off to Olympia Historic Automobile Fair and Auction

Apologies to anyone on Norwich Road in Ipswich this morning as we unexpectedly slowed down the traffic whilst loading our fantastic classics ready for the trip to Olympia, Kensington for this weekend’s Olympia Historic Automobile Fair and Auction.

It was lovely to see so many people come out of their homes to take a look at the cars being loaded…hopefully it wasn’t to shout at us for causing disruption.

Here we have our Jaguar E-Type V12 and Jensen 541 waiting patiently for the sign from Robin at Russell’s Transport to load on. As you can see the Austin Healey Frogeye Sprite and the Fiat 500L got the top bunk. Hopefully we’ll see some of you this weekend at Olympia, we’ll probably be somewhere around the The Whisky Exchange Masterclasses.

Thanks again if you were along Norwich Road today. If you were late for work, just blame Bridge Classic Cars.

Our 1959 Austin Healey Frogeye Sprite (Sebring) arrived at the Bridge Classic Cars workshops bright and early this morning, having travelled down through the night from the highlands along with our 1972 Jaguar E-Type

Now awaiting preparation she will soon be available for sale. This Beautiful 1959 Austin Healey Sprite, has modifications of the type carried out in period by “The Donald Healey Motor Co”(DHMC) it has never been welded, making it an excellent basis for a concours restoration. For more information and to view our full range of cars visit our for sale section. Soon to be arriving at Bridge Classic Cars

This Beautiful 1959 Austin Healey Sprite, has modifications of the type carried out in period by “The Donald Healey Motor Co”(DHMC) it has never been welded, making it an excellent basis for a concours restoration.

Supplied new by “The Car Mart” in London, this car was registered on 5th October 1959. It still carries the original number plates, not only the number itself, but also the actual plates, in pressed aluminium with 3 1/2″ digits as made by “Wright Edgware” (still stamped on bottom) and fitted by “The Car Mart”.

As also befits a car of this calibre, It has the original logbook from 1959, the original handbook and an original BMC workshop manual. In addition to this it has the last tax disc worn by the car just before it was laid up (FEB 73) and it has re-fitted, the period tax disc holder. There is also a comprehensive file of receipts for parts used during the restoration.

This is excellent, being restored with attention to detail, new floors, GENUINE BL inner and outer sills, new rear bulkhead outer skin, new boot floor etc. These were all fitted as per original, using a spot welder for a factory look. In addition, new longitudinal top hat stiffeners were fitted as well as various other minor repairs. The bottoms were removed from the chassis legs so that the muck and rust could be cleaned out and replaced with new metal. It goes without saying that the bonnet is all steel, this was fitted with a new lower front valance. Factory type sealer was then applied as per original (over seams) before the whole body shell was professionally prepared and painted outside, inside and underneath. The colour is the original IRIS blue from 1959. The car has also been drilled to allow a FULL course of waxoyl to be injected. On a hot day it can be seen creeping out of the seams. The wheel-arches and floorpan are as shiny as the body itself. Wherever the car goes it always draws comments about the quality of the panel fit and the finish of the paint. The rest of the components, such as fuel tank etc are also sprayed to a mirror finish in black. Everything on this car is correct, so things like the bonnet fittings, prop, safety catch, horn, original bakelite battery drip tray etc are all original, both in spec and were fitted to this very original car when it was built.

All matching numbers, so this means original to the car, still with engine number as on original log-book, 948cc sprite engine, with original EN16 crankshaft and connecting rods, mated to a lightened (as per special tuning) flywheel. Crank re-ground, new bearings fitted, block re-bored to plus 30 thou, new pistons fitted, High lift cam fitted, new seals (original felt type on crank pulley) and gaskets etc. Fitted with rather special 12G295 cylinder head with 34mm inlet and 29mm exhaust valves, this has been expertly ported and polished in period. Carburettors are 1 1/2″ H4 type SU’s with period ram pipes. A period small bore exhaust manifold is fitted too. The under-bonnet components are all the originals too, things like the original BMC spark plug lead ends, the battery terminals with the lead screwed in terminals, the original heater tap with the smooth brass knob, the original pressed rocker box top with the metal screw cap and the long, turned down oil breather. All original sprite Mk1 and unusual to see all these items still fitted. Smooth type gearbox, believed to be fitted with Mk 11 (close) ratios, this was merely inspected, cleaned and re-fitted. New engine and gearbox mountings throughout, new hardy spicers fitted to propshaft. The rear axle was again merely cleaned, inspected, fitted with new seals and re-fitted. The front suspension was re-built with new trunnions etc as needed.

As can be seen, this car is fitted with wire wheels as per DONALD HEALEY motor co, this means proper splined front hubs that carry a “Q” part number along with an adaptor plate which allows the backplate to be replaced by a GIRLING caliper. The calipers were bought brand new. The car also wears Healey Motor Co type anti-roll bar. New Girling Master cylinders were fitted too, a great improvement over the original Lockheed type. At the back, the car wears 8 1/2″ inch drums again, girling type and fitted with new hydraulics. Original bolt on splined hubs are fitted here, as per DHMC. The wire wheels have been sprayed in two-pack silver, lacquered and fitted with a full set of Michelin tyres (5no). As one would expect with this set up, the car steers and stops very, very well indeed.

Superb and very period looking! Seats were re-built, with new foams etc and I had to have the seat covers specially made with the light blue piping, as per the originals. New carpet set and Mostly new interior trim panels. Instruments are all original to the car and all in full working order. The steering wheel is a SEBRING SPRITE item. A period lucas dipping rear view mirror as fitted to works sprites is fitted too. The doors have the ribbed rubber on the inside and the original moulded door pockets have been re-covered to match the rest of the interior. The cockpit cappings are original, the one over the dash being vinyl covered (as it should be) and the rest still in their original excellent anodised state. I attribute their condition to the fact that the car has always worn a hardtop. The proper Hardura matting extends fully in to the boot, where the spare wheel is properly secured with new original type straps and the boot has side panels fitted. There is also an original BMC type jack and handle in the boot. This is restored and in full working order. The boot is left in brown primer as per original frogeyes.

There is a restored hood frame, as well as a new hood, which has a zip out rear window. The Original frogeye sidescreens (different to Mk2 sprite and Mk1 Midget) have been restored, so they have new perspex and all new seals fitted. There is also an original tonneau cover which has had a new zip fitted.

Genuine BMC works hardtop. The over centre catches have been re-chromed and all the original bracketry is present including the chrome wing nuts and the original aluminium draught excluder clips. New cloth bound weather stripping has been fitted and also a new Headlining even though it never had one. The back window was missing so it now wears a polycarbonate one.

The chrome has all been re-plated, including the handbrake and gear-lever. The exception is the front bumper which still wears good original plating and the original BMC locking petrol cap which is slightly speckled, but very presentable.