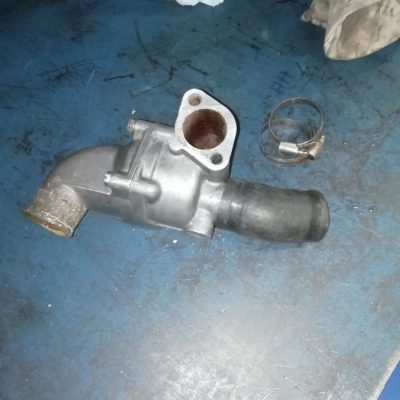 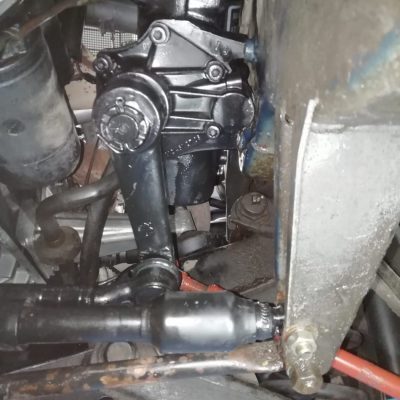 The steering box for the stunning 1966 Mercedes 250SE W111 Coupe is back at Bridge Classic Cars after being refurbished by a local specialist. Now, 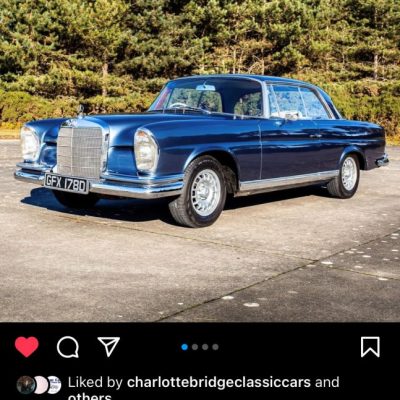 The 1966 Mercedes 250SE that is currently live on Bridge Classic Cars Competitions has been featured on the Mercedes Benz Club UK Instagram Page. This 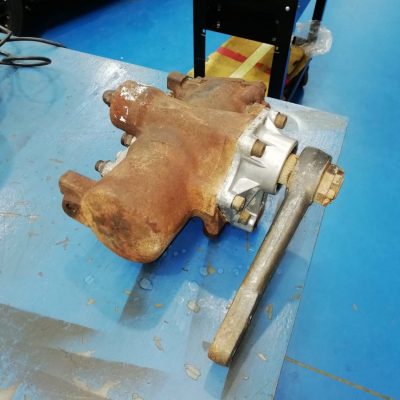 The 1966 Mercedes Benz 250SE Coupe is in the Bridge Classic Cars workshop today ahead of its competition draw to have its steering box removed. 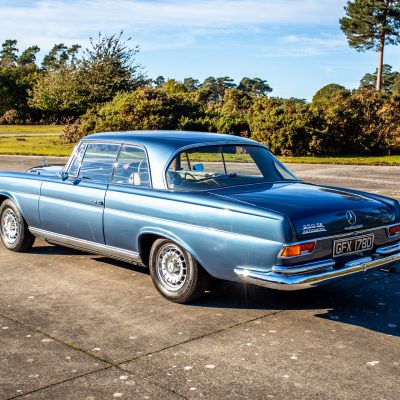 Behind The Scenes – Photoshoot of the 1966 Mercedes 250SE 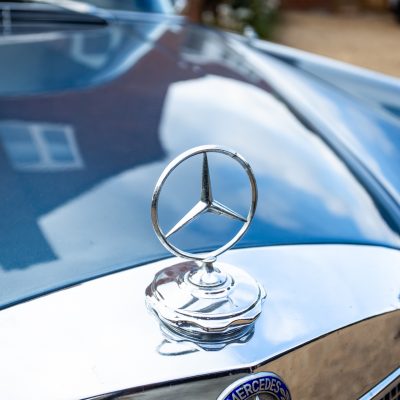 Coming soon to the Bridge Classic Cars workshop is this stunning 1969 Mercedes Benz 250SE Automatic W111 Coupe! This will be making its way into 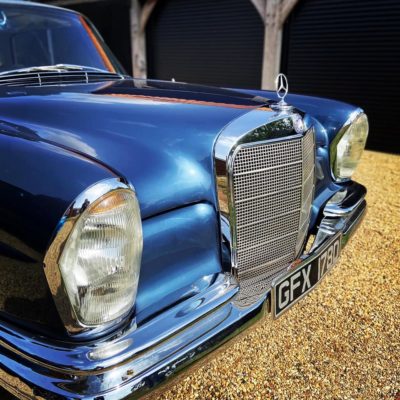 Our lovely 1966 Mercedes 250SE W111 Heckflosse Coupe has been reunited with her owner Chris this week. Bridge Classic Cars have carried out a full 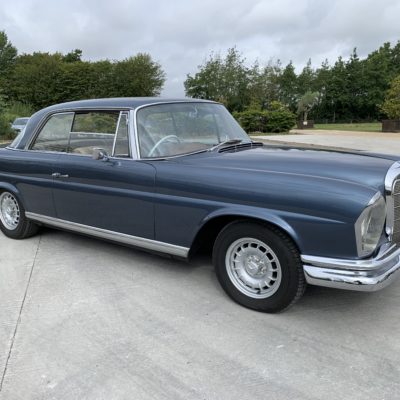 Russell’s Transport have arrived this morning with our latest project, our beautiful 1966 Mercedes 250 SE. The car has recently been handed over to it’s 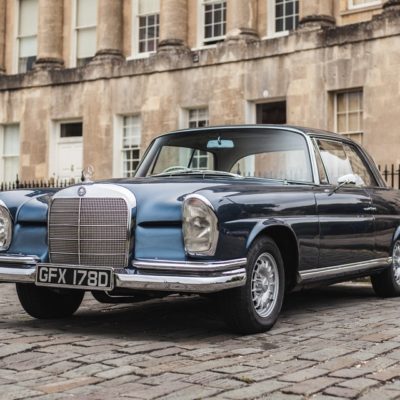 Our Bridge Classic Cars in-house restoration technicians were busy testing the 1966 Mercedes 250SE W111 Coupe before its delivery to its new owner when they noted a slight water leak coming from the car.

Once the thermostat was inspected, it was found that this was the cause of the leak. Paul, one of our technicians, removed the component carefully from the car and prepared it for a replacement gasket and reinstalled back into the car. After this has been put back into the car, it will be tested and checked over again.

The steering box for the stunning 1966 Mercedes 250SE W111 Coupe is back at Bridge Classic Cars after being refurbished by a local specialist. Now, it’s time to get it back into the car ahead of tonight’s live draw!

Paul, one of our in-house restoration technicians, was given the task of getting the classic Mercedes pointed in the right direction. Carefully pull rechecked the condition of all the splines and arms to make sure once the new steering box went in, it would work perfectly and only add to the experience of driving this incredible classic German coupe.

With the box fitted up into the car and everything tightened, rechecked and tested it was Paul’s job to road test the car and make sure everything was working just as it should. Success! this historic piece of automotive style, luxury and engineering was all set to find it’s new owner later this evening.

The 1966 Mercedes 250SE that is currently live on Bridge Classic Cars Competitions has been featured on the Mercedes Benz Club UK Instagram Page.

This incredible classic Mercedes Benz is up for grabs by one very lucky winner. The car itself has a long and colourful history, with celebrity owners such as E L James and David Walliams, it has also been a member of the Mercedes Benz Club UK previously with it’s owners.

It is an absolutely stunning example of the W111 Coupe! It’s honest and has a beautiful story that is written across its 55-year-old body and its wonderfully characterful interior.

To read more about the car or to enter the competition, click the link below and you could be in with a chance to win this stunning classic coupe.

The 1966 Mercedes Benz 250SE Coupe is in the Bridge Classic Cars workshop today ahead of its competition draw to have its steering box removed.

On assessment by our in-house restoration teams, it was determined that the steering box would need to be removed and sent away to a specialist that we have used for many of our steering box rebuilds in the past. So, with that, Paul began to remove the box from the W111 Coupe.

After carefully pulling the unit from the car and inspecting all other components and systems connected to the steering box, all was deemed to be ok underneath the large german 2 door grand tourer.

There is still time to win this amazing car! Head over to Bridge Classic Cars Competitions to enter now!

Behind The Scenes – Photoshoot of the 1966 Mercedes 250SE

Bridge Classic Cars has recently shot this incredible 1966 Mercedes Benz 250SE W111 Coupe with the announcement that it will be our next Bridge Classic Cars Competitions prize that one lucky winner will have the chance of owning.

It was a stunning early Autumn morning when the big 1960s coupe was rolled out of The Hangar. The sun was bright and the chrome work glistened across the entire car. As it made its way elegantly across the airbase, the cold air let the big straight-six breathe easier. Freddie at the controls of the camera and Charlotte at the controls of the vast coupe, it was time to begin the customary photoshoot for each of our cars.

As it sat under the Autumn sun, its true depth of colour and character could be seen by all. Every angle this car was magnificent. The interior carries so much soul and it’s 55 year journey to this very point in time could be seen and revelled in. This car tells its stories better than any of writers who have owned this very car before.

The W111 Coupe’s are the final generation of the hand built Mercedes. A masterclass in crafting a luxury coupe for the jet set to cover the greatest distances in the most amount of luxury as possible. This, car tells the story of a true survivor of a car from a bygone era.

And, it could all be yours..

Click the link below and enter now for your chance to win this incredible piece of automotive history.

This will be making its way into us for assessment ahead of the plans that are being considered for its future. This is an incredible example of the W111 and 1960s German luxury which Mercedes were renowned for from its earliest days all the way to the present day.

Keep a look out on the Bridge Classic Cars news page for any updates on this gorgeous example.

Our lovely 1966 Mercedes 250SE W111 Heckflosse Coupe has been reunited with her owner Chris this week. Bridge Classic Cars have carried out a full report on this stunning classic, to help decide what work to have done in future to keep her in pristine condition.

Chris’ eagerly joined our good friends and fellow classic car lovers over at Vint-Tro to introduce his beautiful motor. In a former life, the car was owned by Britain’s Got Talent Judge David Walliams as well as Fifty Shades of Grey author EL James.

We’re looking forward to the next time we get to welcome the Mercedes 250SE back into our workshop. Until then though, happy driving Chris!

Russell’s Transport have arrived this morning with our latest project, our beautiful 1966 Mercedes 250 SE. The car has recently been handed over to it’s new owner who has asked us to carry out a full assessment so we can put together a plan of future works.

A gorgeous example of a coveted pillarless coupé, this 1966 Mercedes-Benz (W111) 250 SE Coupé benefits from the fitment of a more powerful 2.8-litre straight-six from a 280 SE of the same era. Finished in Metallic Blue with contrasting Fawn leather, the odometer reads 31,203 miles.

This is an original right-hand-drive example, completed in 1966, and was specified with the smooth four-speed automatic gearbox. Now paired with the slightly later ‘M130’ 2.8-litre engine, this W111 offers a desirable combination of usability and style. It is used as a regular run-around for its enthusiast owner, and is presented in on-the-button condition.

The vendor, a member of the Mercedes-Benz Club, has owned the car for around two years, and has covered nearly 2,000 miles in that period. He purchased the car from the individual responsible for the upkeep of the car throughout the previous 32-year period, and its previous owners are reported to include comedian David Walliams and author E. L. James. Regrettably, the car is only being offered for sale as the vendor has a serious illness – otherwise he would certainly be keeping it to enjoy for many more years.

The elegant bodywork presents very well, with crisp shut lines and no signs of any damage. Its smart Metallic Blue paint looks smooth and glossy all around the car, and even the internal painted areas such as the door shuts and boot area are in great condition. The vendor does note some minor age-related pitting to some of the chrome, but in general it looks superb. In the interests of transparency, he notes a small scratch to the front left light housing and front end, a small dent in the front bumper, and a previously repaired chip to the roof – as shown in the detailed photographs. The later 14-inch ‘Baroque’ alloy wheels are in near-perfect condition, and the car also comes with a set of hub caps, which the next owner could colour-code to the exterior.

Moving inside, the Fawn leather interior is believed to be original with a natural patina. The seats show some signs of age, with a small tear to the passenger seat and some slight sagging to the driver’s seat, though the carpets appear in very good order. The original steering wheel wears its age and miles very well, and the dashboard retains a period-correct radio. The wood veneer is showing signs of age in certain areas, as shown in the photos, but undoubtedly adds a wonderful sophistication to the interior. The vendor reports the windscreen wipers need servicing, and that the dimmer and full beam switch for the lights are functional but with reversed switches – both of which are straightforward to rectify.

The car was most recently serviced by Henrietta Mews Garage at approximately 31,100 indicated miles, and prior to this was serviced by well-known specialist John Furber. The 280 SE engine was fitted last year following the failure of the original motor, and is a fully serviced unit in excellent running order. As the under-bonnet photos show, the engine presents very well and is a fine upgrade.

The car is exempt from annual MOT testing on the basis of age, though its last test in April 2018 at 29,318 miles resulted in a first-time pass with no advisories whatsoever. The vendor notes the tyres were fitted recently but are not matching all round, and the car is sold with a tool kit and history file.

This Mercedes-Benz W111 Coupé is a stylish classic that is packed with 1960s charm and elegance. It is an eminently usable example, presented in very impressive overall condition, and benefiting from the stronger 2.8-litre straight-six. The rest of the 250 SE remains in highly original order, and it would make a beautiful addition to any collection – and a fine cruiser for any classic car enthusiast.